We also recently submitted Spokin as a project for the Knight Foundation’s News challenge.  They post it online so others can comment, so please check it out and provide feedback!  Here’s the summary of the project we provided for them.

In two sentences:  Spokin is a member-curated civic network with neighborhood community well-being report cards based on open data and social media analytics.  Just as the quantified-self movement emerged from people using personal informatics to promote their own positive health and quality of life behaviors, we leverage social media analytics, open data, and community-curated content to quantify communities, empowering them to promote their own well-being through increased self-awareness and collective efficacy. 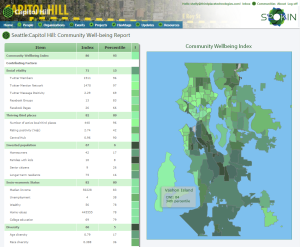 A key objective of Spokin is to help people engage with others in their local communities by increasing their awareness of issues that might affect their community well-being as they arise.  Historically, government agencies have measured the well-being of neighborhoods in terms such as crime rates, home ownership, and the income of its residents.  As government agencies adopt a policy of transparency through the open data movement, this information is increasingly made available for unrestricted use through data hosting services and public APIs.  Open data sources include census data, crime incident reports, 311 issue reports, new business licenses or construction permit reports, and geo-spatial location information for local organizations.

These newly available data resources present many exciting directions to explore when seeking to increase community self-awareness. However such urban and socio-economic metrics do not provide a complete picture of community well-being.  In recent years there has there has been an effort (as exemplified by Diene et. al., 1995; the Gross National Happiness Project, 2013, and Morton & Edwards, 2012) to develop measures of community well-being that incorporate more subjective evaluations of quality of life and community engagement.  While a few such measures have been developed (Christakopoulou et al., 2001; Rath & Harter, 2010; Wilkinson 2007) and provide compelling insights, they nonetheless tend to focus on aggregating individual assessments of life satisfaction and personal civic engagement rather than evaluations of the community as a whole.

In addition, traditional self-report measures of community well-being are quite resource-intensive to collect, and are not the most appropriate tools for providing updated, time-sensitive assessments based on changing local events.  As such, citizens usually turn to news media as sources of updated information about their communities (Rosential et al., 2011).  At the hyperlocal level, an important source of information is social media, such as blogs, microblogs, and social networking sites.  In particular, social media tools have been used to report various activities including breaking news (Kwak, 2010), including crises like floods (Vieweg et al., 2010), earthquakes (Sakaki et al., 2010), or even during wartime (Monroy-Hernandez, 2012).   As a consequence, online discourse in social media generates persistent data traces, through which we may collect attitudinal data at a more societal scale (De Choudhury et al., 2014; Monroy-Hernandez et al., 2013).

While a valuable source of hyperlocal information, social media is also problematic and often requires algorithmic analysis to be of use.  As we noted in Hu et al. (2013) in motivating the development of Whooly, a neighborhood-based Twitter aggregator:

Researchers have explored whether messages in prominent public networks around local topics could be analyzed to provide a signal of local well-being.  For example, Schwartz et al. (2013) found small but statistically significant relationships between self-reported individual life satisfaction measures, Twitter affect, and census data.  Cranshaw et al. (2012) found that Foursquare check-ins meaningful corresponded with socially constructed neighborhood regions, which suggests they may be used to assess community activity and cohesion.  This line research is very promising, and we seek to innovate in how social media and open data may be used to dynamically assess community well-being in a way that is actionable for community organizers.

Our Spokin community report pages algorithmically integrate social media analytics with more traditional metrics from open data sources to provide a rich, actionable picture of a community’s well-being for community organizers and citizens.  See attached image.  The development of our metrics of factors that impact hyperlocal community well-being are informed by social science and validated against “ground truth” self-report measures of neighborhood experts.  Key factors to date include a) social vitality – metrics indicating that community members know each other and regularly interact; b) thriving third places – metrics indicating that there are active community third places outside of the work and the home where community members may regularly interact; c) the presence of an invested population, such as homeowners and families, d) sufficiently high socio-economic status indicating that the community has the resources to resolve issues, e) diversity in perspectives and skills that often leads to creative, innovative group solutions, with the inclusive culture required to benefit from said diversity, and f) low stressors, such as excessive commuting times and unemployment.  People may explore the different community metrics in the report card by clicking on each of them (see left side of image), which then dynamically visualizes the metric across neighborhoods with a D3 map (see right side of image).   The community report cards are shared in the context of Spokin’s member-curated community networks – including a who’s who of people, organizations, projects, and events active in the community, a visualization showing how they are connected, and an aggregated updates stream – to best facilitate the formation of new community connections and dialogue around shared issues.

The need we are trying to address.

Community well-being is one of the most important factors that impacts quality of life (amongst financial, personal relationship, physical, and psychological wellbeing). However, few individuals are educated to understand what impacts well-being at the communal or societal level, or how to take collective steps toward improving communal well-being. Spokin will provide tools for increasing the collective intelligence and empowerment of community organizers and everyday citizens.

What progress have you made so far?

Spokin builds on several years of prior R&D projects examining the use of social media for increasing awareness of dynamic hyperlocal, neighborhood issues. We started prototyping Spokin in the spring of 2015 and hope to have our “MVP” by early spring 2016. During the summer of 2015, we were selected for the eScience Institute (UW) Data Science for Social Good summer incubator program, where we worked with an interdisciplinary group of data scientists to develop a prototype of the report pages.

What would be a successful outcome for your project?

Successful outcomes would include adoption rates (active users per day) comparable to other civic socio-technical tools in our target metropolitan areas, partnerships with several leading city or NGO agencies seeking ongoing well-being metrics in their areas, the active use of our APIs to integrate our Community Well-being Index into other web sites, and the use of our open-sourced analytics code to facilitate research and development with sibling agencies or web sites.

Spokin is in “closed alpha” but if you want to see a demo to learn more, send me an email at shelly at thirdplacetechnologies dot com.