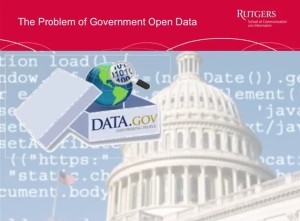 Yesterday we held our third Social Media Expo at the 2015 iConference, sponsored by FUSE Labs at Microsoft Research.  This has been a great way for us to encourage interdisciplinary student teams to explore emerging themes in the field that are also of particular interest to FUSE Labs.

This year’s challenge was to “explore new and exciting ways to foster societal awareness and conversation at the intersection of open data and social media”.  In 2009 the white house sent out an Open Government Directive, requiring government agencies to adopt the principles transparency, participation, and collaboration in part by publishing government data online in open formats.  Five years later there is an amazing plethora of information freely available, enabling people to “conduct research, develop web and mobile applications, design data visualizations, and more”. (see http://www.data.gov).  At the same time, an analysis of social media data helps us understand and reflect on historical and real-time aggregate behavior, allowing both organizations and individuals to gain a deeper understanding of their society. These two trends create an opportunity for a kind of large scale conversation – as governing agencies share their data with their citizenry, and as the population at large engages with organizations through tools such as Twitter, blogs, and Facebook.  We encouraged teams to approach this year’s theme with an interdisciplinary combination of user research, design explorations, prototyping, real world deployments with usage analysis, or community engagement.

We were very pleased with the quality of the submissions this year, and we to thank the five winning teams who received the grant for all the work that went into their projects and their presentations at the Social Media Expo.   The best project award went to the University of California, Irvine’s team, for their project “ Racial Violence Archive: Public Information System on Incidents of Violence during the Civil Rights Period”.

TransparencyScience. Return on research investment, where do the funds go?

Following the presentations we had a brief discussion.  Common threads across the talks and discussion include:

Thanks again to our student teams for their hard work, their faculty sponsors for providing guidance, the organizing committee for developing the theme and writing reviews, and  the iConference for generously hosting the Social Media Expo.

Please learn more about the team project by reading their abstracts or watching the video submission on Youtube.